Code:Deck are an awesome set of cards just for Developers, SysAdmins, Web Designers – and just about anyone else who has to tinker with some kind of code – as the website slogan says “Playing Cards. For Developers, By Developers”,

They are made from a chrome matte paper and feel smooth to play with, even performing the odd trick of 2 seems simple with these cards with there high quality touch,

If you are a programmer, QA or student in IT that loves playing card games then code:deck is for you! code:deck is a standard playing card deck sporting a stylish modern design. Each individual card features a code excerpt describing it in one of many programming languages. We tried to compile a wide selection of programming languages – from generally acknowledged staples and utility languages in software development to newer alternatives and weird curiosities!

Are you bored while playing by the bland designs of other decks? Do you want to rack some more style points on your next Team Building? Need a gift for a friend employed in IT and out of ideas? Stop wasting time and grab your code:deck today!

The cards are also clearly labeled which suit and number is which so for those of you who are a little less savvy understanding the languages displayed, you can still pay a game of Poker like a pro with no IT experience,

The pack of cards costs just $10 and can be found here – code:deck

These are on my Christmas list -gief me another pack! 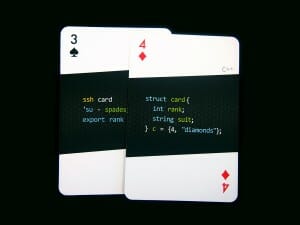 Here are the example languages and cards included –

Three sends pornographic marketing text to the subscriber base